Cypriot property in spotlight amid claims 35k were mis-sold

Two legal claims launched in Lodon and Cyprus on behalf of UK consumers. 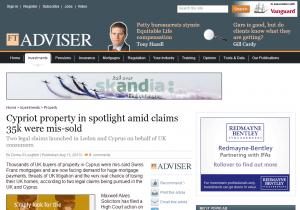 Thousands of UK buyers of property in Cyprus were mis-sold Swiss Franc mortgages and are now facing demand for huge mortgage payments, threats of UK litigation and the very real chance of losing their UK homes, according to two legal claims being pursued in the UK and Cyprus.
Maxwell Alves Solicitors has filed a High Court action on behalf of 215 clients with “substantial claims” against the Cypriot arm of Greek banking group Alpha Bank and 24 associated property developers.

Despite the allegations involving the purchase of properties in Cyprus, the law firm said proceedings were commenced in England because the buyers are UK consumers and are afforded the protection of EU legislation on cross-border selling.

In a separate action, Judicare, a legal firm acting on behalf of over 200 buyers, has filed 145 law suits against Alpha Bank in Cyprus, with hearings scheduled for October.

Both claims state that UK consumers have found themselves bound to a loan in Cyprus which is unaffordable to pay and not what was explained. The law firms agree that in total there could be around 35,000 consumers with similar claims.

Maxwell Alves is asking for “complete nullification” of the claimants contracts due to the circumstances under which they were entered into with Alpha Bank and the property developers concerned. It is also seeking compensation for alleged various contract breaches.

Stylianos Christoforou, Cypriot barrister at Judicare, said UK consumers had to take out Swiss Franc mortgages “as the bank would not give them any other option” and that due to currency fluctuations they have seen monthly installments treble.

According to George Kounis, consultant at Maxwell Alves Solicitors, British purchasers of properties in Cyprus have €1.6bn of loans outstanding to Cypriot banks. He said balances have grown because the Swiss Franc loans appreciated in value by approximately 40 per cent against the euro, while property values fell by up to 70 per cent.

Where buyers are unable to keep up repayments, Mr Christoforou said the Cypriot court is issuing writs to some UK consumers and that this should not be ignored, as there is an agreement in place between Cyprus and England that allows Cypriot courts to issue decisions.

“That decision will be a valid court decision which then will be sent to a UK law firm. That UK law firm will register that decision with a UK court so it will then be made a UK decision and can be enforced against the assets of the buyer. Their property here is endangered.

“Hundreds of writs have been served and the majority have been ignored.”