The London Office is managed by Daniel Cheung

Daniel Cheung practises the following areas of law: commercial, property, litigation and immigration. He is dual qualified as a Solicitor-Advocate in England and Wales and a Solicitor & Notary Public in Scotland. Daniel obtained his Masters degree at The Edinburgh University and obtained his Legal Practice Course with Distinction at The College of Law. He subsequently studied Wills, Probate and Administration at the University of Cambridge. He has previously worked as a lawyer at a Legal 500 firm and another niche City law firm. As public recognition of his achievements, in 2013 he was selected for the 2013 Rising Star List by Thomson Reuters, an international media and information company. Daniel is a member of the Solicitors Association of Higher Court Advocates, Scottish Young Lawyers Association and an Executive Member of the Taiwanese Chamber of Commerce in England. 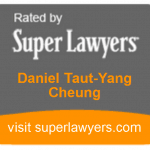